Voted one of the world’s best villa rental companies by Condé Nast Traveller for the last few years, family-run Tuscany Now & More is driven by a fair ethos that benefits both the customer and property owner. A week-long stay in the luxurious La Palazza Nel Cielo (The Palace in the Sky) was more than enough time to realise that when all parties are happy, life is good, very good.

The unremarkable Italian town of Pieve Santo Stefano in Eastern Tuscany doesn’t offer much to write about; a few shops, a couple of bars, a supermarket, all hugged by a gentle river. Venture to the right place into the nearby hills, though, and you’ll find paradise in the form of La Palazza Nel Cielo – one of 138 hand-picked properties managed by family-run villa rental company Tuscany Now & More. Like the town, it’s also hard to put this place into words, but for entirely different reasons. 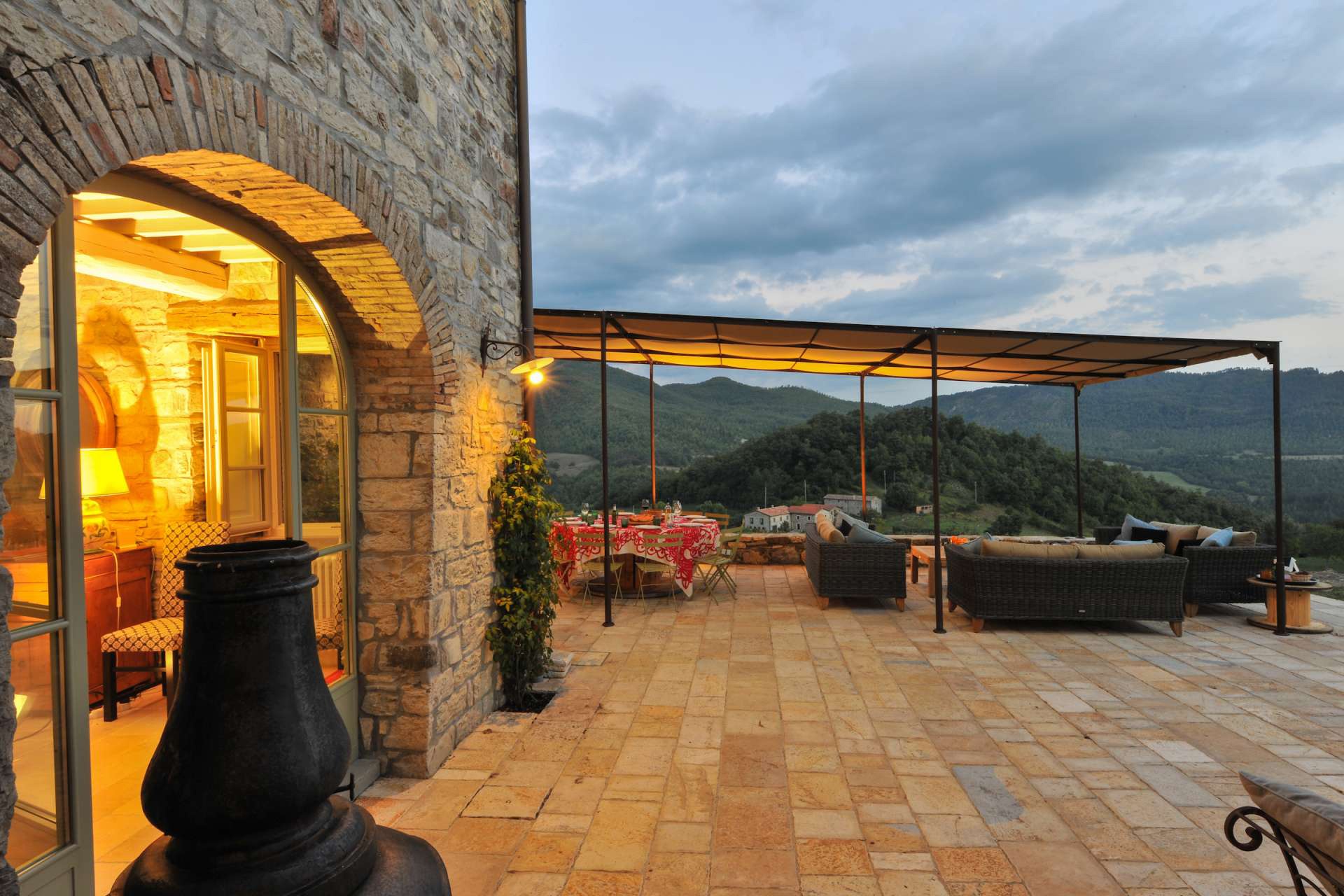 After landing at Florence Airport, collecting my Fiat 500 rental car, and driving all but 10 minutes of the two-hour journey to the villa, my phone gave up the ghost. Without Google Maps I was lost. I only knew the villa’s name, that it was just outside Pieve Santo Stefano, and beautiful thanks to photos. Luckily a local pushing his bike up the steep gradient was on hand to offer some convoluted directions; a couple of wrong turns and 20 minutes later a magnificent sight rolled into view. Lit up at dusk and set perfectly in the foothills of the Apennine Mountains, La Palazza Nel Cielo has a quiet dominance. It’s grand, but not too grand and radiates sophistication, while the infinity pool melts effortlessly into the incline to the north. I could see the silhouettes of my friends enjoying pre-dinner drinks on the terrace. I was late but I arrived at a good time.

Tuscany Now & More has made the top 10 in Condé Nast Traveller’s Best Villa Company in the World Awards every year since 2016, coming runner in 2018 and 2019, not to mention making the top five this year. All for good reason: every single villa under its wing is superb, the renter pays a fair price, and the owner receives a fair rental, the majority of which is invested back into preserving these stunning homes. In 1990 the company started by renting out just one house but the story begins decades earlier. The parents of Tuscany Now & More’s Co-founder and CEO Simon Ball bought a place just outside Florence back in 1966 before the entire family upped sticks there from the UK 13 years later. Simon enrolled in college to study art and architecture in Florence where he met his wife (and Co-founder), Barbara and “the seed for the company was planted, but it wouldn’t germinate for a few more years,” Simon says. “By 1985, my siblings and I had moved away from the house so my parents made the decision to rent it because it made no sense for such a beautiful place to stand empty when others were able to enjoy it. For five years, agents rented the property to holidaymakers chasing their own slice of the Tuscan good life, but nothing about the deal seemed fair. Agencies took a huge chunk – often in return for doing very little – my parents got less than they deserved, and travellers paid more than they should have. This was the final push we needed to start our own villa rental company.”

So in 1990, Simon and Barbara set up Tuscany Now (relaunched as Tuscany Now & More when further locations were added in 2014 throughout Tuscany, Umbria, Liguria, and around Venice and Verona). Each of the 138 villas is managed by the company under its own mutually beneficial ethos. Benedetta, the joint owner of La Palazza Nel Cielo, is testament to this. She paid us a visit, along with Simon and Barbara’s daughter Jasmine, Tuscany Now & More’s Creative Director, one evening laden with several bottles of local wine. Benedetta shed some light on the history of the villa, its painstaking renovation, and how she is able to successfully maintain it with the money she receives from the rental. Upkeep for such a unique property isn’t cheap: six bedrooms, said heated infinity pool, immaculate grounds, and fine masonry all adds up. I made sure the wine was well hidden from the rest of the 12-strong party after Jasmine told me it was for pairing with dinner – to be cooked the following day by a private chef kindly organised by the company.

Simon personally selects each new villa added to Tuscany Now & More’s portfolio. “We look for properties characterised by traditional style but equipped with modern interiors and comforts,” he says. “There must be air-conditioning in the bedrooms, for example, en suite bathrooms are essential, and we expect a high level of maintenance and care to meet our customers’ needs. Each villa must offer privacy, a private pool, well-kept gardens and outdoor living spaces.”

Company villa specialists make sure to stay in each and every property so they know them inside out, which means they are able to match each customer perfectly to a villa, depending on their preferences. The size of our party, which for a couple of days swelled to 14 people, was taken into consideration when La Palazza Nel Cielo was proposed; we spent many a late hour in the huge converted barn, complete with table tennis and table football.

Despite the fact that everything in the villa worked perfectly, a 24/7 on call specialist was on hand to answer any questions, both before we arrived and during our stay. “Over 30 years we have grown like a family and now have 23 permanent staff split between two offices in London and Barcelona, not to mention 400 people who help with everything from pool cleaning to paperwork,” adds Simon. “Then there are villa owners, each of whom we know personally. All of our properties tell their own story and we look forward to continuing this narrative long into the future.” 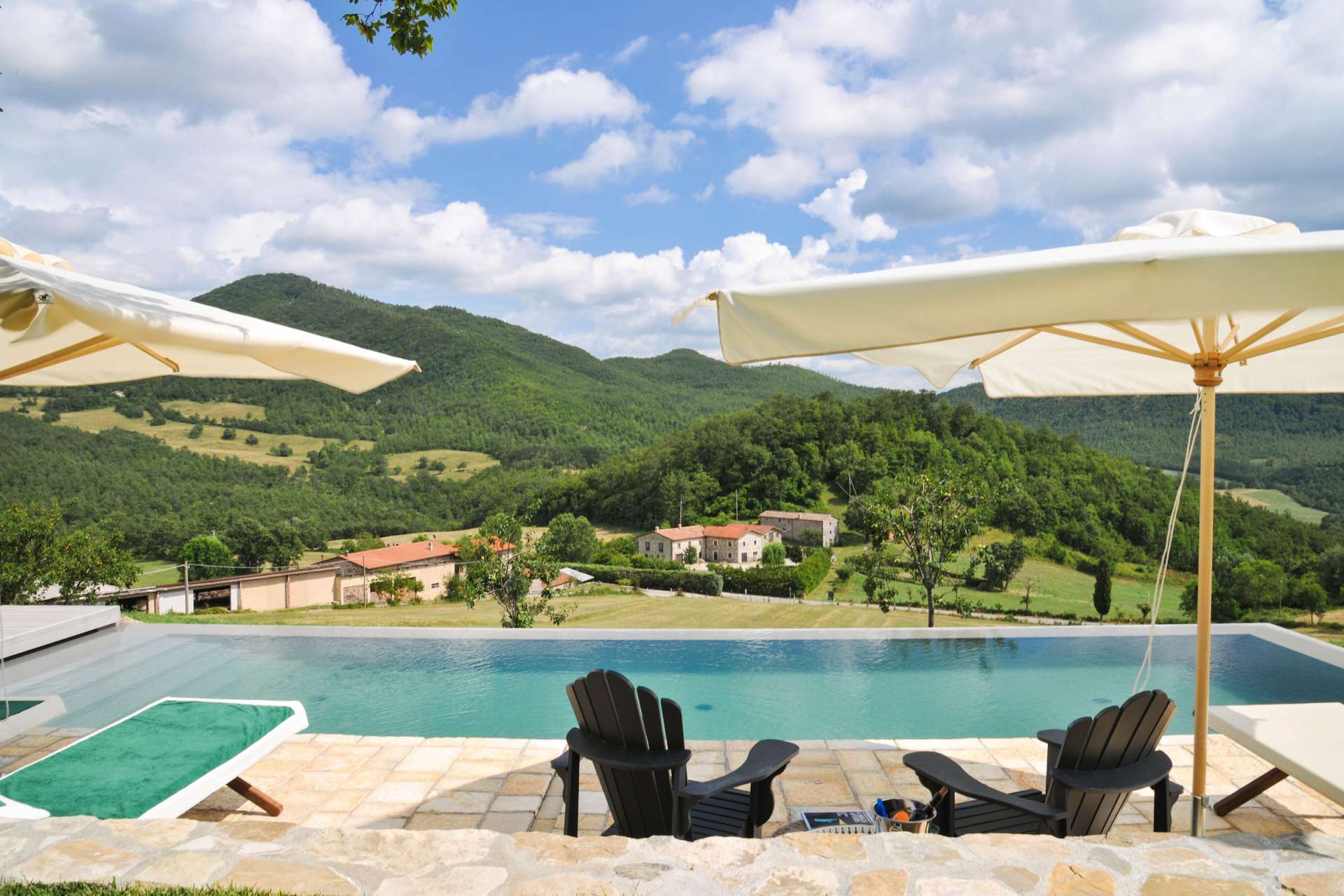 Overlooking the valley from the infinity pool

On the final night of our stay everyone was getting ready for yet another big dinner, only this time the chef – Silvano – and three waiters were steering the ship. He even had time to give a pasta-making lesson before whipping up an incredible  multi-course menu including lobster, tuna carpaccio, and octopus salad. It was a send-off fit for royalty and yet another example of how Tuscany Now & More goes the extra mile to look after their customers.

Barely able to move after such a wonderful dinner, I was one of the first to slip into the heated pool overlooking the undulating Tuscan countryside. I realised I hadn’t given the daily grind of London a single thought over the week, and the prospect of returning to its grey streets after such a mesmerising holiday pained me. Still, perhaps it was for the best, if I had stayed any longer in La Palazza Nel Cielo I may have developed delusions of grandeur. Living like a king really takes its toll. Read the print article here.