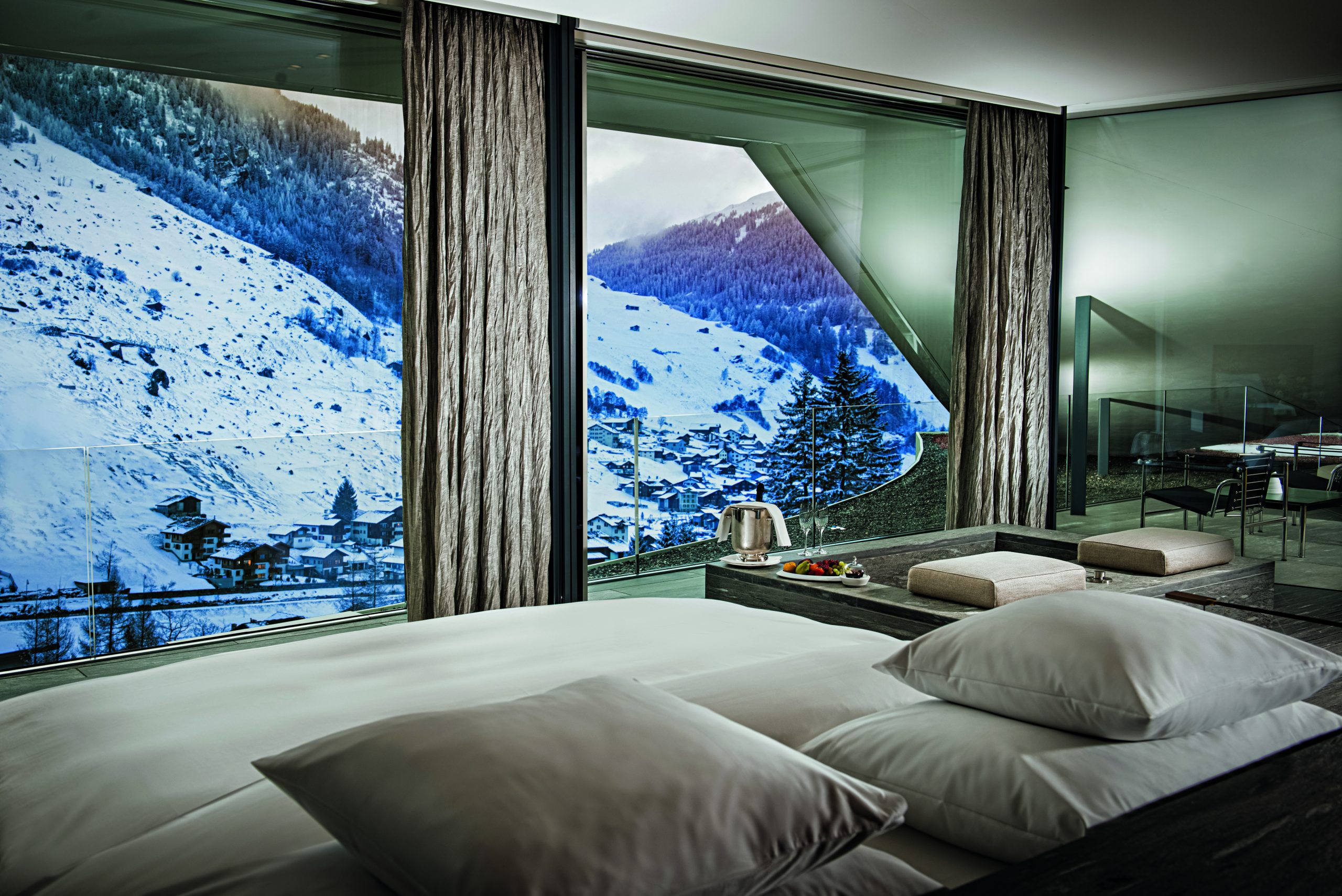 WHAT?  Standing guard at the entrance to Swizterland’s Grison Alps in the village of Vals, 7132 Hotel is a superb blend of unparalleled service and staggering beauty. Five-star luxury merges with striking architecture overlooking grey, snow-covered mountains. It’s all rather dramatic. Built-in the 1970s, the hotel is renowned for its Peter Zumthor-designed spa and thermal springs, which – during the winter – billow steam into the freezing, star-filled sky. With an on-call fleet of limos and its own helicopter and helipad, it’s not surprising that 7132 attracts a well-heeled crowd who expect the finest rooms, food, and atmosphere.   WHERE?  The mountain village of Vals is located at an altitude of 1,250 metres above sea level, deep down in the Vals Valley, a side valley of the Surselva south of Ilanz. The village square is still surrounded by original Vals houses roofed with stone tiles made of Vals quartzite. The peaceful Grisons holiday resort offers hiking pleasure, wellness at the thermal spa, and winter sports opportunities on the Dachberg. 7132’s iconic spa is made from the same quartzite, so it merges seamlessly into its surroundings. . There are a number of ski slopes nearby to choose from in the winter and endless walking trails for the summer. The hotel is 180 kilometres from Zurich Airport (ZRH)  WHY?  Perhaps we should be asking ‘why not?’ 7132 Hotel is stunning and the service is impecible. 7132 Silver, and 7132 Cristal, the hotel’s two Michelin-starred restaurants led by head chef Mitja Birlo, boast menus offering creative, modern dishes, while the other restaurant – the exclusive 7132 Red, spearheaded by the head chef Patrick Siekendieck – is an exemption. Perhaps the hotel’s biggest draw, aside from the sweeping views and brilliantly equipped rooms, is the thermal springs made from 60,000 slabs of Vals quartzite. They are open into the wee hours so guests can relax in the eight bathing rooms, which vary from icy cold to a piping hot 42 degrees Celsius, while the luxury spa has everything from a water massage room to a hair salon.