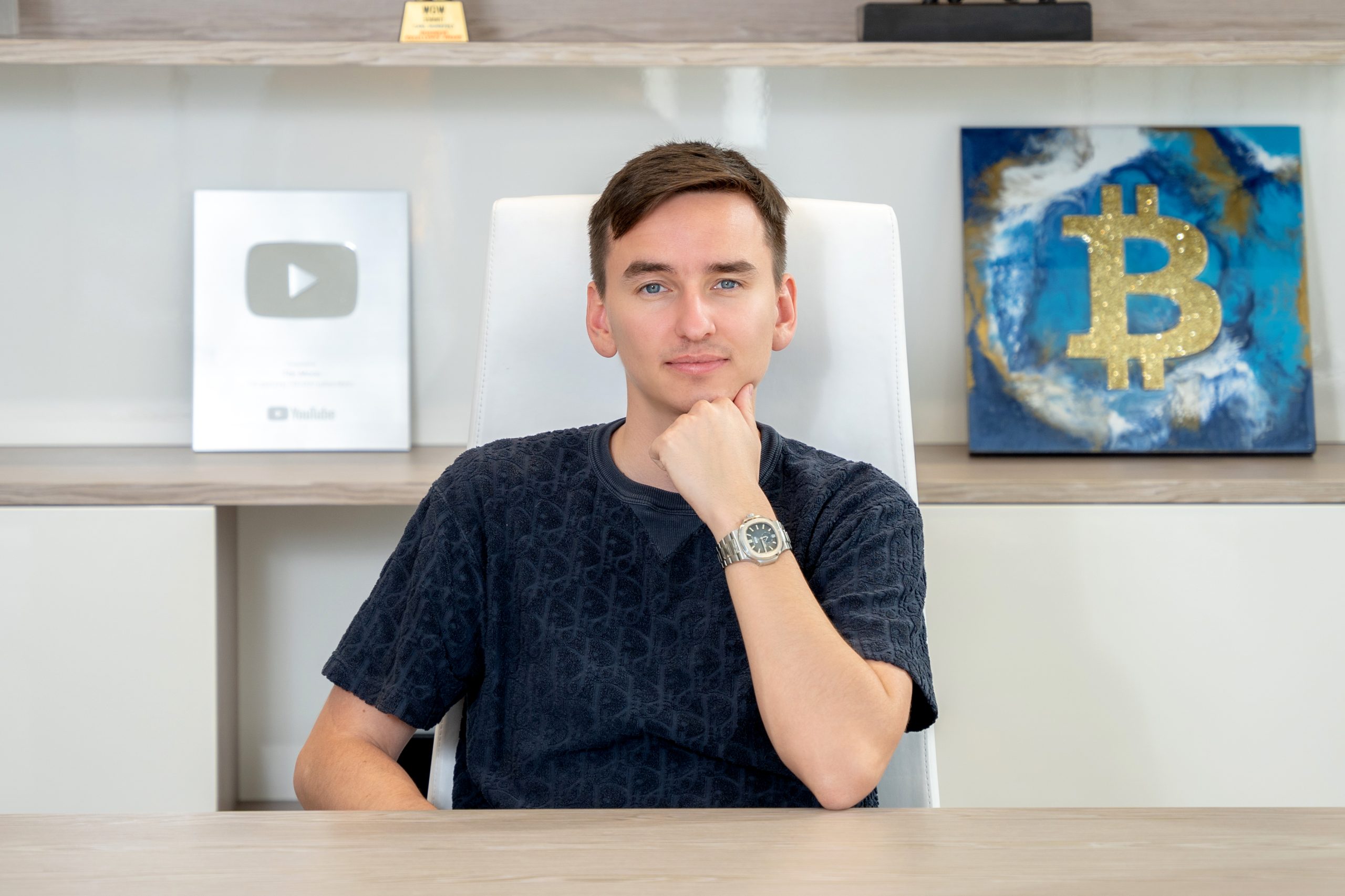 From unfulfilled grocery-store cashier to billionaire cryptocurrency investor, Carl Runefelt’s quickfire rise to success sounds like an entrepreneurial fairy tale. We spoke to the man known by his huge online following as ‘The Moon’ to discuss the mindset needed to effect such an inspirational transformation.

Twenty-seven-year-old Carl Runefelt finds himself in an unusual position for one so young. Listed on Forbes ‘30 under 30’ list and the focus of global media attention, the Swede’s influence is as wildly impressive as his ten-figure bank balance. He has over 1M Twitter followers, 500K YouTube subscribers, and thousands more across other social media platforms. What makes this all the more remarkable is that it has been achieved in a relatively short space of time.

Like many neuro-diverse individuals, Runefelt left full-time education early. His diagnosis of attention deficit hyperactivity disorder (ADHD) meant he struggled with the restrictions of a school routine, so the youngster decided to focus instead on making a living. A mundane job in retail followed before Runefelt underwent something of an epiphany.

“The important thing to know about my journey is that the move into crypto came second,” Runefelt explains. “What came first was that I made a decision to become successful and rich. I always wanted to maximise my potential, and I knew that working as a cashier was not going to get me there because it limited my creativity.”

The difference, Runefelt believes, came when he read about and started to utilise the ‘law of attraction.’ This theory, from the New Thought spiritual movement, posits that positive or negative thoughts bring positive or negative experiences into an individual’s life. Runefelt felt his eyes were opened by this doctrine of self-empowerment and began to practice positive visualisation, which he found incredibly powerful.

I started pretending to be successful even though I still worked at the grocery store.

“There were times I took the train to my job but imagined I was driving a Ferrari. Soon I started looking up yachts online and pretending I was ready to purchase one. All of this helped me to get more in tune with the future that I believed would happen.”

The internal belief that this created, that he was capable of achieving such dreams, led to a search for opportunities. Carl made an attempt at e-commerce, selling goods online, but did not feel passionate enough about it. When he came across Bitcoin, however, he instinctively recognised that there was an arena in which such dreams could be achieved. In the first instance, he intended to combine both the businesses by making crypto-related web content, then selling linked merchandise such as T-shirts. After starting up in 2017, this quickly changed.

“I had so much fun making the videos,” Runefelt says, “that I quickly forgot about the whole monetisation thing. I didn’t really care about selling anymore, I just wanted to make the videos because I was having so much fun. I actually made zero money for the first six or seven months on YouTube.”

Throughout this early part of his journey, the young entrepreneur’s own knowledge of cryptocurrencies grew through rigorous research and practical application. He began by reading up on traditional assets such as gold and silver and how global institutions such as the Federal Reserve function. With that grounding, he then mastered major cryptocurrencies such as Bitcoin, Ethereum, and Polkadot, developing his understanding of them both as a medium of exchange and financial assets in their own right. This meant that when he began putting content online, it immediately carried intrinsic value. All manner of viewers, from beginners to more sophisticated traders, could take something worthwhile from his analysis.

His predictions usually proved uncannily accurate. According to Carl, the bitcoin currency will always show an upward trend as it is a centralised currency, with no physical limitations. All one needs is a mobile phone and an Internet connection to get going, without hindrance from physical institutions such as banks or stock exchanges.

“I soon realised my purpose in life was to help others with my knowledge, and I did just that,” he explains. “I utilised digital tools and reached more of an audience. But the key thing, I think, is that I really enjoyed what I was doing. When what you do is fun and you can make money from it, you’re on the right track. I love making my videos, trading, and investing. I found the path of least resistance to achieve my big goals.”

Before long, his social media ventures began to reap monetary rewards, as well as personal ones. What began by engendering a sense of satisfaction soon became staggeringly profitable.

“It didn’t even take two years before I was already a millionaire,” he recalls. “I quit my grocery store job in November 2018.”

I thank myself every day for deciding to become the person I am today.

“I was not happy with who I was several years ago. The strategy to becoming whoever you want is to convince yourself that you already are. You attract it if you act as though it’s already your reality.”

Despite his incredible success so far, Carl is not ready to relax and admire his own achievements. His goals for the future are as ambitious as his initial plans but has now developed a growth mindset, he sees no obstacles to achieving them.

“The hard part was what I did already,” he says. “Coming from nothing to where I am now should have been the most challenging thing, but I did it in a couple of years. Now I have the momentum. Once you have the right way of thinking, each new goal just feels like a natural progression. To go from $0 per month to $10K per month is hard. But to go from $10K to $50K, not really.”

New companies have already been founded under the umbrella of The Moon Group, with targets set for revenues and numbers of employees. As a result, he is not just an investor in crypto and a social media star but is involved in a variety of other ventures, from providing liquidity and farming yields to investing in start-ups and co-founding a new project, Kasta, a payment app providing an alternative to traditional payment solutions.

However, Carl is keen to emphasise that not all his goals are financial. He also set friendship and relationship goals and others which are important for broader well-being.

I want to be remembered for changing people’s lives and helping them see that anything is possible if they put their minds to it.