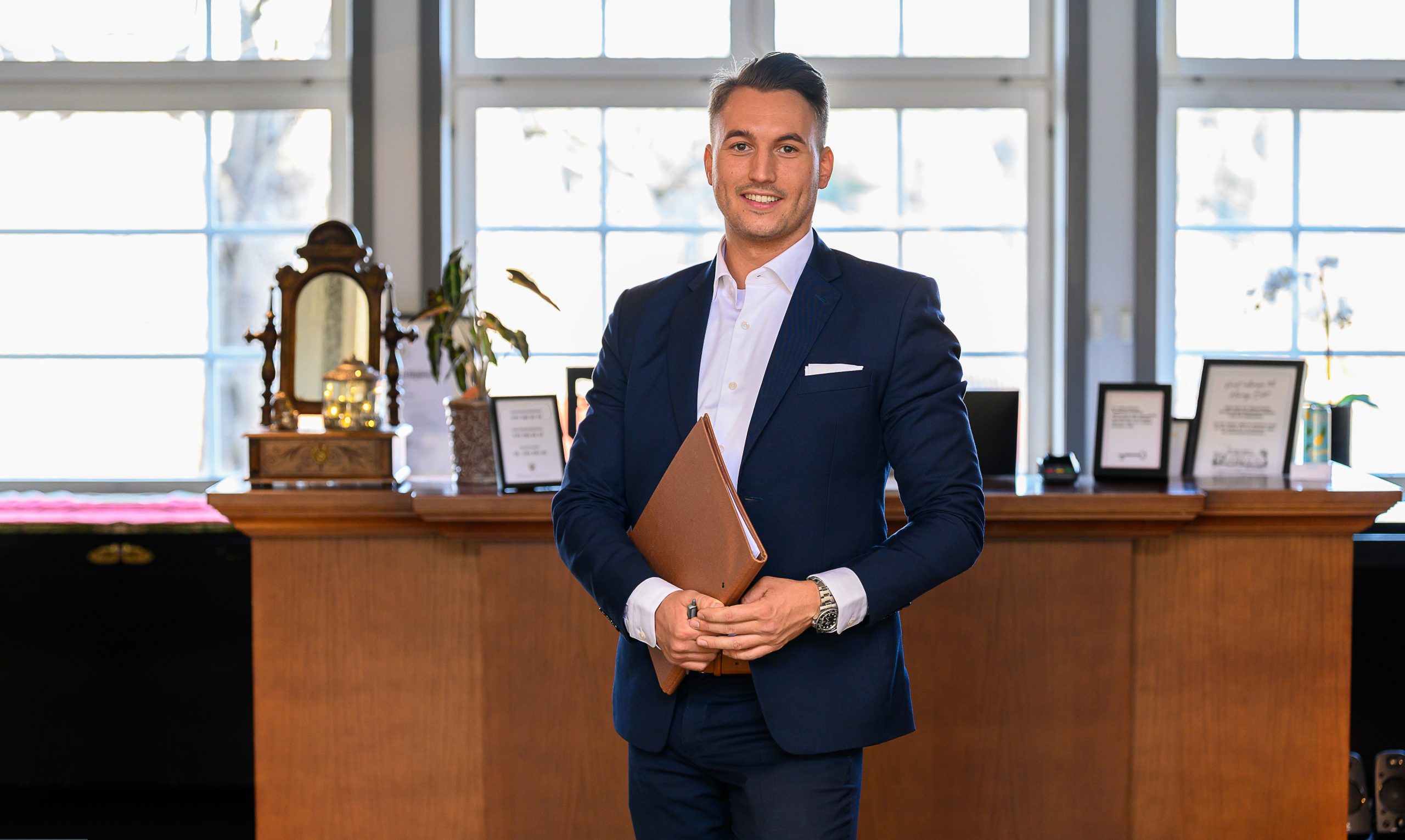 Svensk Husman makes socks, but not just any socks. These socks are inspired by Sweden’s cuisine, culture, and “fika” (explained later on). You can wrap your feet – or someone else’s – in colourful designs celebrating köttbullen (meatballs), dammsugaren (pastry filled with marzipan), kräftan (crayfish), and loads of other traditional dishes. There’s also Sweden-themed swimwear, underwear, bags, and other colourful stuff to choose from.

Svensk Husman’s products are proving such a hit that after starting out with just four designs and making its first sale in August 2019, the company now has retail outlets in the US, Hong Kong, Australia, UK, Japan, and Germany, on top of its native Sweden. So, where did the idea to create socks come from?

“I was on holiday with friends in Spain back in 2018 and I suddenly thought it would be cool to make really bold socks in homage to my country,” says Eric Blomster, the brainchild behind Svensk Husman (which translates as “Swedish home cooking”). “I’m a trained chef, I love cooking so it was an easy choice to base the designs on my favourite foods. This makes Svensk Husman pretty niche compared to other sock companies – I wanted the concept to be fun and it has taken off far quicker than I ever imagined.

My dad Nils sometimes helps me with the bookkeeping and sales, it’s just us two us, things are more or less developing on their own at the moment, we’re just trying to hang in there and keep on top of everything one step at a time. It’s a lot for just two people, but we’re loving every minute of it.”

Eric wants the world to know about Sweden’s diverse food and traditions, one of which is the aforementioned fika. The word is often translated as a “coffee and cake break” but it means so much more. Fika is a concept, an attitude, a state of mind integral to Swedish culture; many Swedes believe it’s almost essential to make time for it everyday. “Svensk Husman is a tribute to fika and food through fun clothes – we want to take people on a journey through Swedish culture,” Eric says. 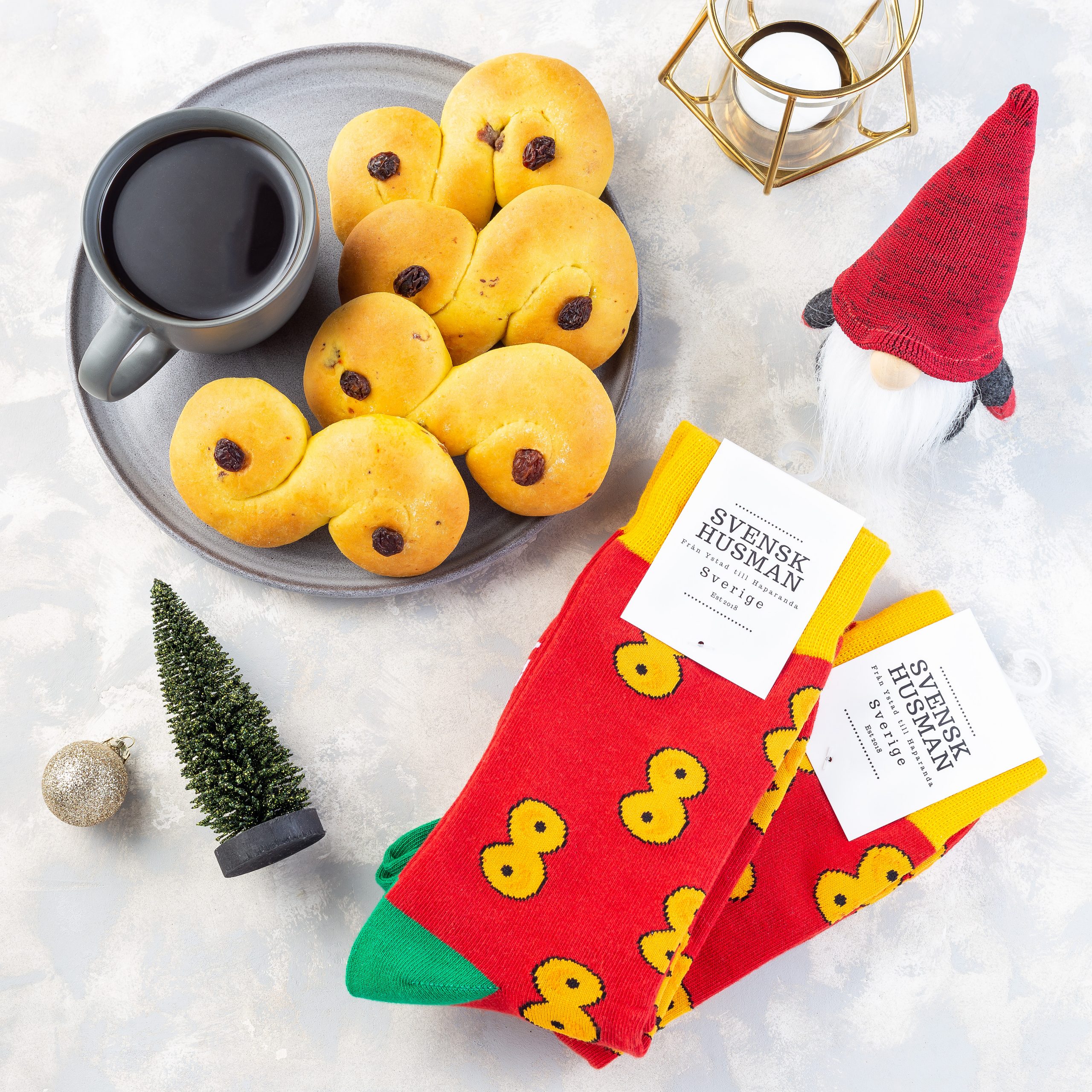 Like a lot of things, the devil is in the detail and Svensk Husman’s founder has carefully selected suppliers who can be relied on to produce exactly what he wants when it comes to design. “The meatballs on the socks need to look like meatballs, the cakes should be perfect, the detailing is crucial,” he explains. And it shows. The socks, bags, swimming trunks (even the mobile phone cases) et al. look incredible.

The pandemic continues to serve up logistical obstacles for the company but fortunately Svensk Husman was up and running online long before the virus took hold. Eric adds: “One of the biggest challenges at the moment is not only keeping up with all of the orders, but also keeping up with the pace of our manufacturers – because we’re expanding all of the time we’re being forced to find new warehouse space to keep everything before it’s shipped out. Shipping costs have risen threefold, which is eating into our profits, so let’s hope the world defeats coronavirus as soon as possible. We’re in the process of changing suppliers in the EU because we’re trying to minimise the ordering time for our customers but we need the same exact quality. We’ll never sacrifice quality.”

The fact that Svensk Husman‘s designs revolve around Swedish food gives Eric focus when creating new motifs for his socks, not that he’s stuck for ideas. “As the sole designer, I’m always thinking about new concepts, it’s a 24/7 job,” he says. “I have an entire wall devoted to new designs, it’s one thing the company doesn’t lack. Most sock companies cover several different design themes but we’re just concentrating on food for now – it’s tempting to expand into other areas (we’ve been discussing the prospect of cutlery and kitchen themes) but we’re just trying to sell as many food themed socks as possible. We’re a small company that wants to give something fresh to the market, something that no one has done before.”