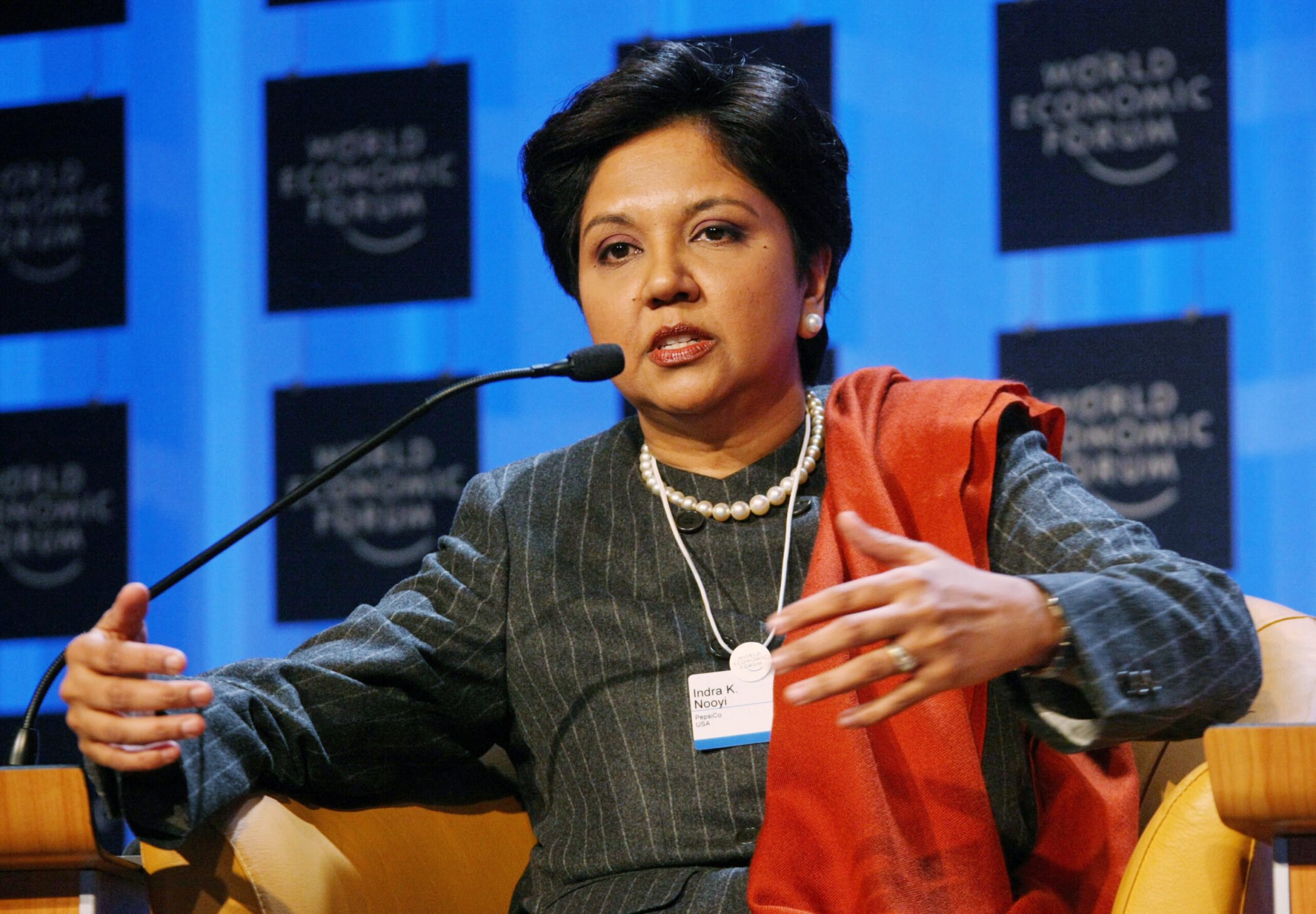 Indra Nooyi thrived as PepsiCo’s CEO for over a decade against all odds – as an immigrant and woman of colour she is a huge inspiration for females and minority groups, both in business and life.

Former CEO of PepsiCo Indra Nooyi rose from humble beginnings to become one of the most powerful businesswomen in the world. In total she spent almost a quarter of a century with the company and 12 years successfully spearheading it – during her tenure as CEO sales increased by a staggering 80%. On top of this, she’s one of only a few Asian and black women to run an S&P 500 company. Indra is the epitome of self-made, her journey to the pinnacle of the corporate ladder was a tough one but it’s made her the force she is today.

Born into a poor family in the Indian city of Madras (now known as Chennai) in 1955, Indra and her sister were always encouraged to dream big by their mother. “The area in which I grew up was water-starved, we only had running water for two or three hours a day so we would find every pot in the house and fill them,” she said. “When my sister and I were kids, every night at the dinner table our mother would ask us to write a speech about what we would do if we were a world leader, and we would be a different prime minister or president each day. At the end of the meal we would have to give our speech and our mum would vote for the best.”

Fuelled by the confidence instilled in her by her mother, Indra won a place at the prestigious Indian Institute of Management (MII) Calcutta at the age of 25. Of the 100 or so students in her class only five were women, attitudes were conservative but this only made her more determined. During tough moments, she would think back to the speeches she wrote at the dinner table and told herself: “I know I am good, I could be the president of India!” She was eventually accepted to Yale University, where she worked as a receptionist in a local hotel during the night to fund her studies.

In 1994, Indra joined PepsiCo and was promoted to CEO in 2006, replacing Steven Reinemund and becoming the fifth CEO in the company’s 44-year history. Throughout her career she’s stuck to a few principles to keep her focused and motivated, one of which is “always put yourself in your customers shoes.” At PepsiCo she was tasked with managing 26,000 employees globally as well as 100 trademarks and brands – yet despite her lofty position she took a firm interest in how things were running at ground level. She would visit stores herself and take photos of the Pepsi products on offer and send them to her marketing team with notes on how the labels and design could be improved. This attention to detail made everybody in the company, from the top down, up their game because they knew Indra would leave no stone unturned in her quest for perfection.

“I’m not just a CEO, I’m also a consumer, so I look at business through a different lens and then I come back and I talk to my people about what I saw that was good, and what wasn’t very good,” she said.

After stepping down from her role at PepsiCo in 2018, Indra became a co-director of the recently created Connecticut Economic Resource Center – she now helps to shape the state’s economic development strategy. She also serves on the board of Schlumberger, the International Cricket Council, and Amazon. In high demand since moving on from the drinks giant, she’s found it difficult to turn down projects and offers: “Rather unfortunately, I’m always over-committed because I just don’t know how to say no. So I’ve become involved in too many things and my resolution for 2020 is to learn how to say no and to avoid taking on anything new.”

Indra has revealed that she doesn’t miss being at the helm of one of the world’s most recognisable companies because she now has more time to focus on issues close to her heart, like encouraging the next generation of women to reach new heights in business. She’s spoken about creating a sisterhood because “unconscious bias can only be addressed if the sisterhood calls it out.”

She said that as an immigrant, a woman of colour, and a CEO of a large company which was undertaking a large transformation, there were critics around every corner. “I’d say the ratio of supporters to critics was 80:20 in favour of the critics, so all the time I was in the public eye trying to answer the criticism, it was a grind all the time, you had to do it with great aplomb because if you were down they read too much into it.”

And when it comes to advice to other women trying to make it in business, and any other industry for that matter: “Everybody is waiting for you to buckle under pressure, especially for women, unfortunately, the expectation is that you won’t be confident and able to withstand tremendous pressure. So my advice is that when you do find yourself going through pressure, act as confidently as you can, show that you’re absolutely in control – and if you really need to have a good scream or a cry, which I did every now and then out of frustration, spend some time alone for 15 minutes.”