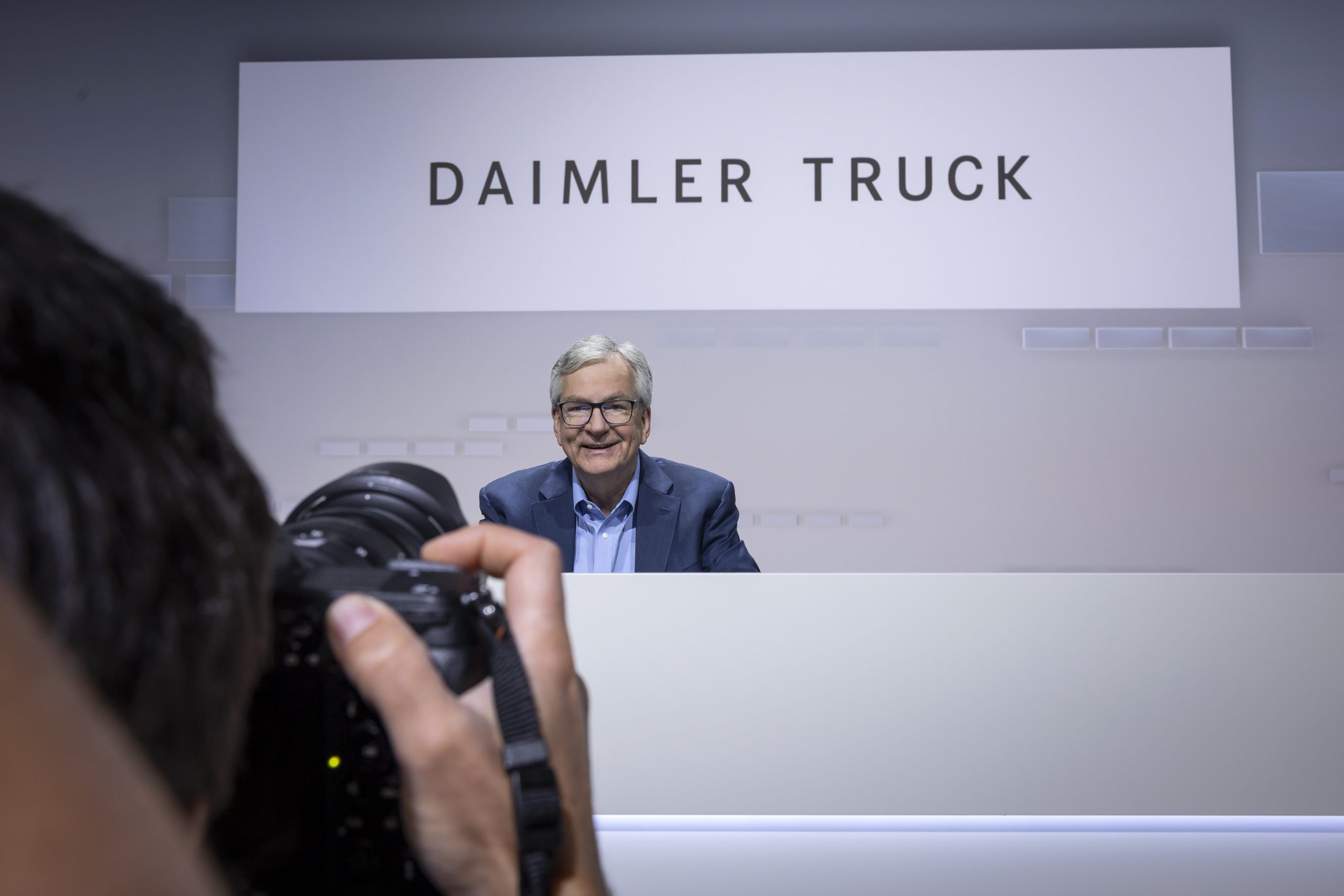 While established brands generate instant recognition, they can also pose challenges. We chatted with Martin Daum, chairman of the board of management of Daimler Truck Holding AG, formerly part of the Daimler AG, about working under a name everyone knows in a less glamorous part of the market.

Commonly celebrated under the guise of its hugely popular brand name, Mercedes, Daimler AG has been a go-to marque for those seeking luxury, high-end automobiles for more than a century. Customers for whom precision engineering, functionality and reliability were as important as aesthetics provided a loyal and ever-increasing international market. Yet sleek convertibles, powerful sports machines and elegant executive rides were not the company’s only offerings.

The less heralded Daimler Truck and Bus Division grew steadily throughout the late twentieth and early twenty-first centuries. Specialising in light, medium and heavy-duty trucks alongside city and intercity buses and coaches, by 2019, it operated over 40 production sites worldwide and employed more than 100,000 people. Such was its success that it was then incorporated as an independent subsidiary, and in 2021, Daimler Truck Holding AG spun off as a fully separate, DAX-listed company.

Chairman of the Daimler Truck Board of Management Martin Daum joined the parent company, Daimler-Benz, in 1987. Over the thirty-five years since, he worked in multiple positions across the corporate structure in various divisions. He started running Daimler Truck in 2017 as a board member before taking up his current role in 2021.

“Joining Daimler is a decision I have never regretted,” he reflects with a smile. “I have had such a diverse career with so many different, exciting opportunities.”

The company is always changing, and it is so satisfying to be a part of that evolution.

“To have a similar career in smaller companies, I would have had to switch companies four or five times, but I haven’t needed to do that because of Daimler’s scope.”

Martin began in the global sales organisation, where he learned, through experience, about local vehicle markets in a wide variety of countries. Even in these early days, he also realised that while the most famous Mercedes models were all cars, the truck market offered something more fundamental.

“I worked in many countries with developing economies,” Martin explains. “You know, Thailand, Cameroon, Guatemala, and so on. In many of these places, trucks are an essential item, and I mean truly essential. It is one thing to introduce luxury cars for the rich in those countries to drive, but that only impacts the lives of a small minority. It is quite another to see your buses helping ordinary people go about their lives, your trucks helping local producers to deliver their goods or raw materials and so on. This was always intriguing for me.”

With his outlook shaped by these early experiences, it is not surprising that the young executive found himself acutely aware of accelerating globalisation while also being drawn towards the commercial vehicles side of operations. In 1996, he became a project manager for Mercedes-Benz Trucks in Portland, USA and by 2002 had become CFO of Mercedes-Benz Trucks. Various senior executive appointments followed, with Martin gaining seniority as his chosen division grew steadily stronger. Throughout this time, as his executive career flourished, he increasingly recognised the importance of human assets as the heartbeat of any business.

“Most important to me is that I tried to be a mentor,” Martin says proudly. “This is such a strength of Daimler,”

"Just as some senior guys at the company mentored me when I was young, I make it my business to do the same."

“I take the career development of employees very seriously and am determined to help my people develop. My philosophy is simple. I don’t like the idea that someone should enter a job or organisation trying to reach the top. The important thing is to do the job that you currently have, as well as you can. Don’t look ahead to the next promotion. It will come on its own if you work in the right way.”

With the groundwork laid by his steady climb up the corporate ladder, a climb which Martin insists was unplanned, he has found himself well positioned to take the overview needed for leadership and strategy formulation. His career up to now has provided insights into sales and marketing, logistics, organisation and production, creating what he refers to as a “jigsaw puzzle.” By 2019, those pieces began to slot together.

All of this led to Martin Daum taking the reins at Daimler Truck Holding AG just before it struck out on its own, an event that carries with it a strange sense of destiny. There is excitement, of course, especially as the problems of the coronavirus pandemic recede into the background. Supply chain issues remained a major headache for all niches of the automotive industry for a long period, but now conditions finally appear to be improving. Nonetheless, the fledgling company’s chairman is aware of both the challenges and opportunities inherent in this new venture. He is trading under an established name but navigating a new and shifting era.

“For us, as we look to the future, expansion is not necessarily the name of the game,” he explains. “Conservation might be the right word. We are already a global company and in fact are the only brand that covers all continents of the Earth, even Antarctica. So you know, unless humans conquer Mars, and we need to break into that market, I don’t feel expansion is a priority.

“What we need to really focus on is a kind of transformation. We need to move away from the internal combustion engine because of the damage that CO2 emissions are causing, and this is a major concern for us. For everyone, of course, but especially for a company like ours. So we need to change from combustion engines to zero-emission ones but do it in the right way. It is a Herculean task.”

For decades, the commercial vehicle industry has relied on diesel as the most efficient fuel for its needs. With that no longer viewed as a viable option, innovation is required. The sector needs to align with modern thinking and must do so urgently. As might be expected, with sustainability such a burning issue in all areas of commerce, Daimler Truck’s work on this has already begun.

In an unprecedented move, a partnership has been created with Volvo, a long-time fierce competitor. The erstwhile rivals have pooled resources to find solutions, and as a result, the joint venture Cellcentric was started as a company destined for the first fuel-cell mass production in Europe. These hydrogen zero emission engines will propel various models both in the world of Volvo and Daimler Truck.

With this in hand and under continued, reflective leadership, could the Daimler Truck Holding AG story develop into one just as inspirational as that of its parent company?

“We have to overcome the challenges, of course,” Martin says, eyes twinkling. “And we know that we will, for one, very simple reason.”

He pauses for a moment. This is clearly a man who believes in his work.

"Without trucks, life comes to a stop."