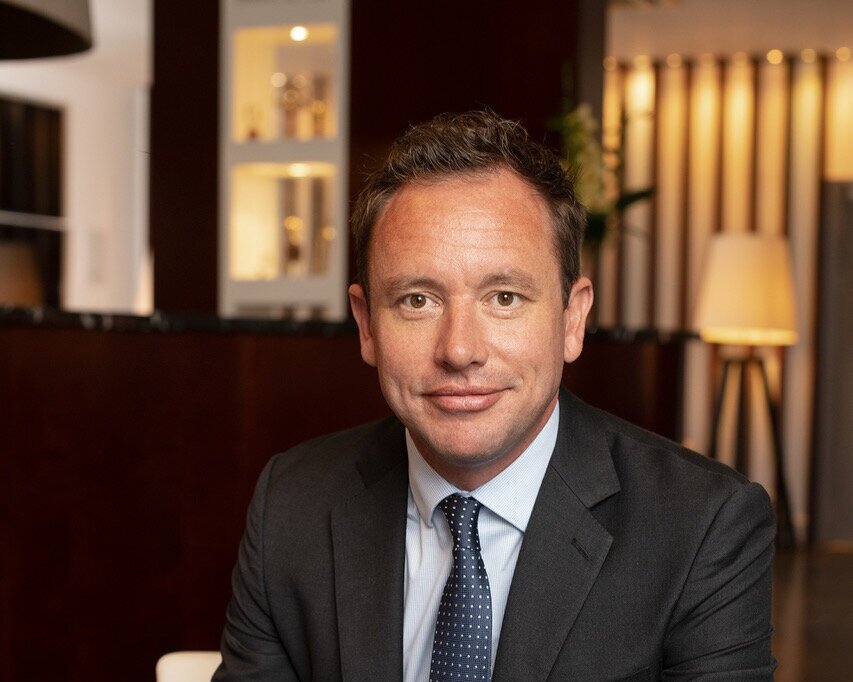 Maybe it was fate at work when a young Niels Eggerding landed his first internship selling Frederique Constant watches in his native Holland. Fast forward a few decades and today Niels reflects on that moment, now sitting in his Geneva head office as Managing Director. “I remember, during my very first meeting with the brand, I felt instantly attracted by the craftsmanship and the eye for detail. And I never forgot it.”

The Frederique Constant Holding was founded in 1988 by Dutch entrepreneurs Peter Stas and Aletta Stas-Bax, both on a mission to produce Swiss mechanical watches at accessible prices. In a further twist of fate, Niels bumped into the pair of founders in 2011, when working at a trade show in Basel, selling Longines. “I saw Peter and Aletta looking in our window and yelled out, ‘Hey, don’t spy!’ They were a bit shocked because I spoke Dutch, but we started to talk, and I was attracted by their passion and vision. They were very determined.”

A short time later Niels was invited to Geneva to meet the founders again at their headquarters. The company was looking for someone to drive their global sales and Neils seemed to fit the bill. It was their vision that convinced Niels to move with his family to Geneva three months later. “I’ve never seen a CEO as visionary as Peter. I worked for the Swatch Group, and I’ve met very influential people in the industry. But Peter had something very unique,” he explains.

The Citizen Holdings group already owned La Joux-Perret and other associated brands, so it wasn’t the first time a Swiss conglomerate moved under Japanese control. Nevertheless, the integration of a small, fast-moving company into a large behemoth created certain challenges, and Niels is candid that the amalgamation resulted in a new dynamic.

When working for a family-owned company, you have very fast communication lines.

“It’s a very hands-on mentality, very Dutch-pragmatic. Then when you come to integrate a large corporation, with 20 affiliates and seventeen thousand employees, the decision-making process involves more people, thus taking more time than our past operational system.”

Niels talks about the Frederique Constant risk strategy and how they had to adjust it according to the Citizen Group’s philosophy. Essentially, the approach was around comfort with failure: “We decide to move, then execute. We might fail, maybe two times, maybe three times. The fourth time we succeed. That is our risk management. The Citizen Group had another vision for the brand, therefore, it took three to five years to adapt and manage the changeover. “

Niels is passionate about the work he has done to integrate the business, particularly with regard to staff. “The key to success is our people – the company stands with its people. That’s what I Iearned from Peter and Aletta, to secure the team and perpetuate the legacy they have built.”

The flat structure of the company is something that Niels sees as a point of difference both with his staff and his competitors, something he packages up as the culture of the company. “Although we have been taken over, the Dutch culture is still very present. That means we don’t have many management layers, we’re very flat, and that gives us the agility to move fast.” Speed and agility are two attributes that come up again and again through our conversation. Skills that also helped the company negotiate the commercial challenges that came with covid. “The danger in luxury brands is stock. So, in March 2020, it was very clear that a big crisis was coming. We acted fast to cut or postpone the supply chain. Postponing is something a supplier never likes. But we asked them to keep stock on the shelf for us and we would come back big time.” The strategy worked, and Frederique Constant cleared the worst of the pandemic with healthy enough books to reinvest.

The Frederique Constant brand is synonymous with innovation, which in a way is surprising for a company that has found its niche in “affordable luxury.” It would have been easy for them to stick to rolling out classic, entry-level swiss watches, but that’s not the company’s style. “What innovation means for us is to do what has never been done before. It can be using a material, or it can be creating a complication.” Serious innovation began for the company when they designed their own high-end hand-wound movement, the FC-910 caliber, in 2004. The company then introduced an in-house tourbillon, and in 2015 rolled out the first hybrid smartwatch that combined traditional watchmaking aesthetic with cutting-edge technology. Niels recalls the moment he and Peter Stas introduced the watch to the market. “Before we went on stage he said, we have this moment now, we’re going to treasure this and to celebrate, because tomorrow, all the other brands will jump on it.” This was a watershed moment in watchmaking history and was followed in 2016 with the introduction of an in-house perpetual calendar and in 2018 a perpetual calendar with a tourbillon escapement. “Really for us, innovation is not only the creation of a complication but in building the concept, ready for mass production so that the watchmakers can produce it at a large scale.”

And scale is where Niels is focused for the future. His aim is to increase production per year, but he is adamant this won’t mean a price hike. “We will hold the price range, from €500 to €3,000, with only particular exceptions above that. It’s important that we serve the customer today and the one in ten years’ time in the same price range. But I would also like to offer more luxury in the coming years. More innovations. Really drive growth with innovations.”

Innovation and scale mean the company will need to rely on the crucial role that suppliers fill. Luckily Niels considers suppliers as an extension of the organisation. “They even come to us with opportunities that they see, like for a new movement. We discuss the opportunity together and build it together.” It’s these strong supplier relationships, combined with Frederique Constant’s agility and speed, that create this recipe for success. “We act within six months where the normal industry takes two to three years to act. That can only be done when you have good relations with suppliers, and you are close to them.”

Niels’ leadership philosophy is down to earth and pragmatic, “Work hard, work very hard, but have respect for people. Criticising people or suppliers is easy but motivating them to do better is harder.  And, accept failures.” Niels talks about failure openly and comfortably. It’s an attitude not seen in many CEOs. He seems to accept failure as a natural part of an innovative business process. Interesting, for a business on such a rapid ascent. Clearly, though, failure is not where Niels hesitates. “Accept nine failures, and celebrate one success, big time, whether with your relations and suppliers.” This certainly seems to be the right and “big” time for Niels and the Frederique Constant brand.