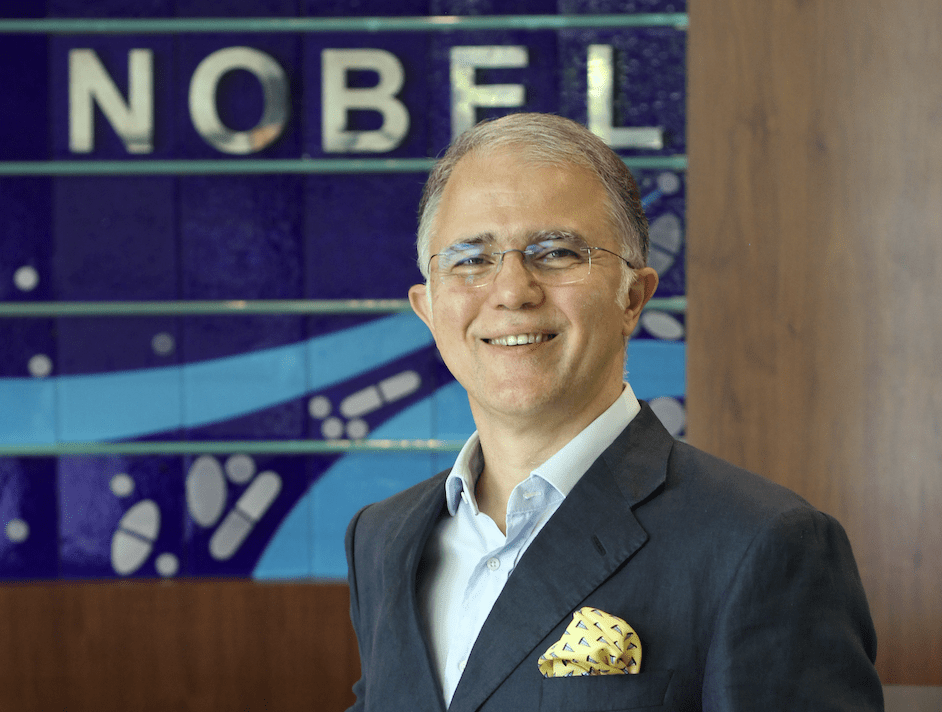 Hakan Sahin was drafted in as Nobel’s general manager in 2013 when the company was struggling – luckily, it no longer is, and it’s down to his ace leadership.

In 2017, Nobel was ticking along nicely; sales were increasing and its operating profit was healthy. However, two key issues were irking General Manager Hakan Sahin: there was a high turnover rate of its sales force, and Nobel’s growth trajectory still wasn’t as steep as he wanted.

To resolve these shortcomings, Hakan implemented a five-pillar strategic plan to enhance the pharmaceutical company’s performance.

Nobel was established in 1964 with 100% Turkish capital. Now in its 57th year, it operates five facilities – three in Turkey and one in both Kazakhstan and Uzbekistan. Through promotion and sales, it’s focusing on stretching its reach to a further 20 counties including Switzerland, Germany, the Balkan nations, and those in central Asia. “Our imports are double our exports  – this is critical because the pharmaceutical industry is one of the leading import-export gap providers for the Turkish economy,” Hakan says.

As a consequence of our focus on employer branding at universities, we had 5,000 applicants this year for summer internship programmes, the highest level in the company’s history

Turkey’s pharmaceutical industry once relied on a cost-plus basis – manufacturers would calculate their fixed and variable costs during production before applying a markup percentage to estimate the asking price. As Hakan explains, “there were no sufficient incentives and focus on efficiency and effectiveness.” But a few years after the ruling Justice and Development Party (AKP), a conservative and populist political group in Turkey, rose to power in the country, the Ministry of Health and Ministry of Labour implemented a new policy for pricing. It was developed by studying the price benchmarks of Portugal, Spain, France, Italy, and Greece’s pharmaceutical products. After analysing the data, the Turkish government took the country with the lowest asking price for each product, instead of the total average of the five European countries and started to decrease Turkey’s selling prices to compete. “The government began implementing extra discounts of between 28% and 41%, depending on the product, until Turkish pharmaceutical products became much cheaper than any other products in the rest of Europe,” says Hakan.

There was another caveat in the implementation.

“The government also created an ‘artificial’ euro rate where they printed euros to the real market rate – the ratio to effective euro market rate has dropped almost every year. The so-called ‘applied’ euro rate for the Turkish pharmaceutical prices in 2021 is 4,5786 Turkish lira for every euro, less than half of the real market value (today’s euro-TL exchange rate is 11.18),” explains Hakan.

By 2008, Turkey had the sixth-largest pharmaceutical market in Europe and the 12th largest in the world. The country boasted $10.5 billion in sales and an expectancy of growth between 7% and 10% each year until 2015. Yet, by 2018 sales shrank to $7.1 billion and Turkey dropped to the world’s 17th biggest market.

During these years, many local pharma companies have been acquired by multinationals such as Sanofi, Amgen, and Menarini. Nobel remained independent, yet yearly consecutive losses forced the company into significant debt. The top brass desperately enlisted the help of McKinsey & Company to review its strategy in 2013 – this is when Hakan and Nobel first met; he was working for the management consulting firm and took the company under his roster of clients as a consultant.

During the project, Hakan and his McKinsey team diagnosed Nobel’s operations and drafted a five-pillar programme. Hakan and Nobel’s management struck up such a rapport that he was offered the role of GM at the pharmaceutical giant.

He jumped at the chance and from the get-go fostered an efficiency and effectiveness programme, which helped turn around Nobel’s stumped business model.

Despite this newfound optimism and drive that came with Hakan’s arrival, problems remained: “We were still struggling with promotion, profit margins, and cost structures. Our sales and marketing cost ratio was more than 50% of our net sales, double that of our competitors.” Nobel implemented a new customer segmentation plan to make the most of sales representatives’ visits and optimise its sales and marketing activities.  With this, the company created a series of narrowed-down goals and wasted no time in striving to reach them.

Nobel then streamlined its new product portfolio. “In the past, Nobel didn’t do so well with its launch plans,” Hakan says. “In terms of releasing our new products, we started a much thorough analysis on how the market would evolve, such that we reduced a number of new developments which we had to drop before we went to market. Our renewed product pipeline includes biosimilars as well as an innovative virus-like, particle-based COVID vaccine.”

Meanwhile Nobel launched other programmes to redesign its end-to-end supply chain and refresh the lean manufacturing excellence programme, the third and fourth pillars respectively. As the company implemented the combined proposals, production witnessed a reduction in manufacturing costs and an increase in productivity. To form the final part of the five-pillar strategy, Nobel focused on organisational health. “As a consequence of our focus on employer branding at universities, we had 5,000 applicants this year for summer internship programmes, the highest level in the company’s history,” says the GM.

Hakan has been working at Nobel for almost eight years and has overseen some serious changes for the better during his tenure. The fact Nobel was awarded Deloitte’s “Best Managed Company Award” in 2018 is a testament to his leadership. Hakan is in a reflective mood: “Our turn-around story is being taught as a case study at prestigious universities such as Harvard Business School and we are proud of this.  Yet, what brought us here, will not bring us to our $1 billion vision. We need to change once again the way we work,” he concludes.