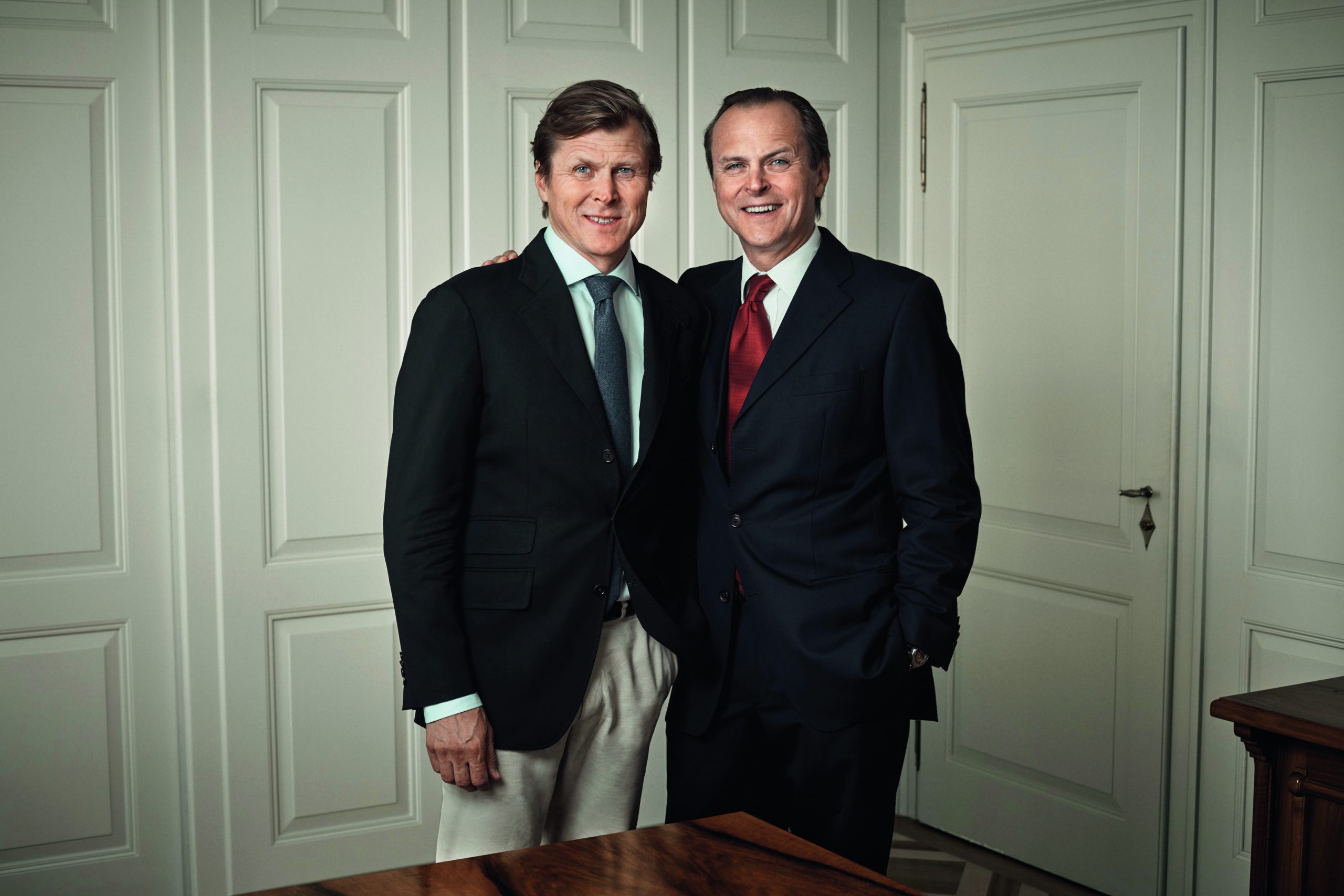 If Willy Wonka was a little less eccentric, had an inclination for sharp tailored suits, and was generally more refined he might be comparable to Milan Prenosil (R), the Chairman of Swiss luxury confectioner Confiserie Sprüngli. For the last 25 years he’s run the company alongside his equally dashing brother, Tomas (L) – the CEO.

Founded in 1836 in Zurich by David Sprüngli, Confiserie Sprüngli is very much a family affair. David’s great-great-great-grandson Richard took the reins more than a century later in 1956 and wasted no time in morphing the chocolate maker into a luxury brand. It’s signature and utterly decadent “Luxemburgerli” macaroons were created a year down the line, positioning the company among the finest confectioners in the world. Milan and Tomas, who represent the family’s sixth generation, have carried the torch since 1994 – and a visit to Switzerland’s business capital is not complete without popping into their flagship store, where you’ll find the best handmade truffles (made fresh every day), cakes, pralines, and of course, macaroons.

The Prenosil brothers can honestly say they know the business inside out having changed roles every six since months for the first decade of their tenure; the siblings have hands-on experience of each department, which has proven invaluable as they continue to successfully weather the pandemic-driven crisis. A world-stopping virus may not dent chocolate’s appeal, but it still has to be made, packaged, marketed, and shipped with the same care and quality Confiserie Sprüngli is famous for.

“My brother and I both studied law at Zurich University, I entered the company in 1991 because our uncle Richard was already 78 years old, despite the fact I wanted to go abroad – but it turned out to be a good move,” Milan says. “Tomas joined me two years later and as CEOs we changed our roles every six months until 2003. Tomas has managed operations, production, and the creative side of things, while I focused on marketing, sales, and the development aspects of the business. As a result, we know all areas incredibly well, which has been a cornerstone of our success.” Since 2003, Milan has been Chairman with operational responsibilities, while Tomas took over as CEO.

Boosting Confiserie Sprüngli’s international footprint and pushing digitalisation as people turn to online shopping in an age of lockdowns have been Milan’s main priority of late. The company has set up shop as far afield as Dubai and Abu Dhabi, while also strengthening its position in Switzerland. It recently opened a store in the Swiss city of Baden, which is positioned to soak up custom from the increasingly populated Limmat Valley close to Zurich. An example of a fine tactical move engineered by Milan demonstrating both his patience and decisive action. “After years of trying and waiting, suddenly a suitable opportunity presented itself, one that made sense both strategically and operationally,” he explains.

“The confectionary market in Baden is hotly contested; there are no other shops in the immediate vicinity and within sight. That is why we opened this shop at the highly frequented station where travellers and customers from the densely populated region can shop, even on Sundays, and we implemented a new concept which highlights our chocolate-making competence and legacy. This is not a provocation and we do not see our competitors as a threat, instead we view them as enriching the market, and we hope they see it like this as well.”

Confiserie Sprüngli is focusing on both the domestic and international market but expanding globally is a different game compared to branching out on home soil, especially when it comes to finding trustworthy partners, Milan explains. “For me, it’s a question of honesty and professionalism, not only being opportunistic,” he says. “Putting faith in the right partners and connections who can help us grow internationally is a big challenge.”

The Prenosil brothers are also enhancing the company’s e-commerce offering, an area in which Confiserie Sprüngli was a pioneer long before COVID-19 disrupted the retail industry. Milan implemented the first e-commerce platform within the Swiss branch as far back as 1997. In many cases around the world, the virus has given people no choice but to shop from home, so speeding up digitalisation has been key. “We have both invested a great deal of time in digitalisation and Confiserie Sprüngli’s online business – we’ve developed new technologies and a new concept that’s really helping us through the crisis. People are sitting at home buying, and the older generations are becoming more internet-savvy as a result so we’re also tapping into this trend.”

Everyone who works at Confiserie Sprüngli is like a big family and Milan attributes much of the company’s success to this. “We are constantly working to maintain our core values – we want to remain successful in the future, but we can’t just accept business at any cost,” he explains. “It’s about upholding the values we stand for, we are a good team and we hope to stay independent as a family-owned company. Our employees are the most valuable thing we have. At the moment, our most pressing challenge is to survive this crisis and to take a motivated crew with us, which we will – so leading, managing, speaking, and connecting with our employees is one of the core elements of success for the future.”

And where there’s family, there’s usually emotion, especially when chocolate is involved, as the Chairman points out: “Our legacy, experience, readiness to reinvent ourselves, to not get stuck on traditions, but to develop them, to be a step ahead is what drives us. We are creating emotion around our products and clients, this is why we have such a big international fan base, because they like our services, style, quality, and the taste of our chocolate. This is what stands Confiserie Sprüngli apart.”