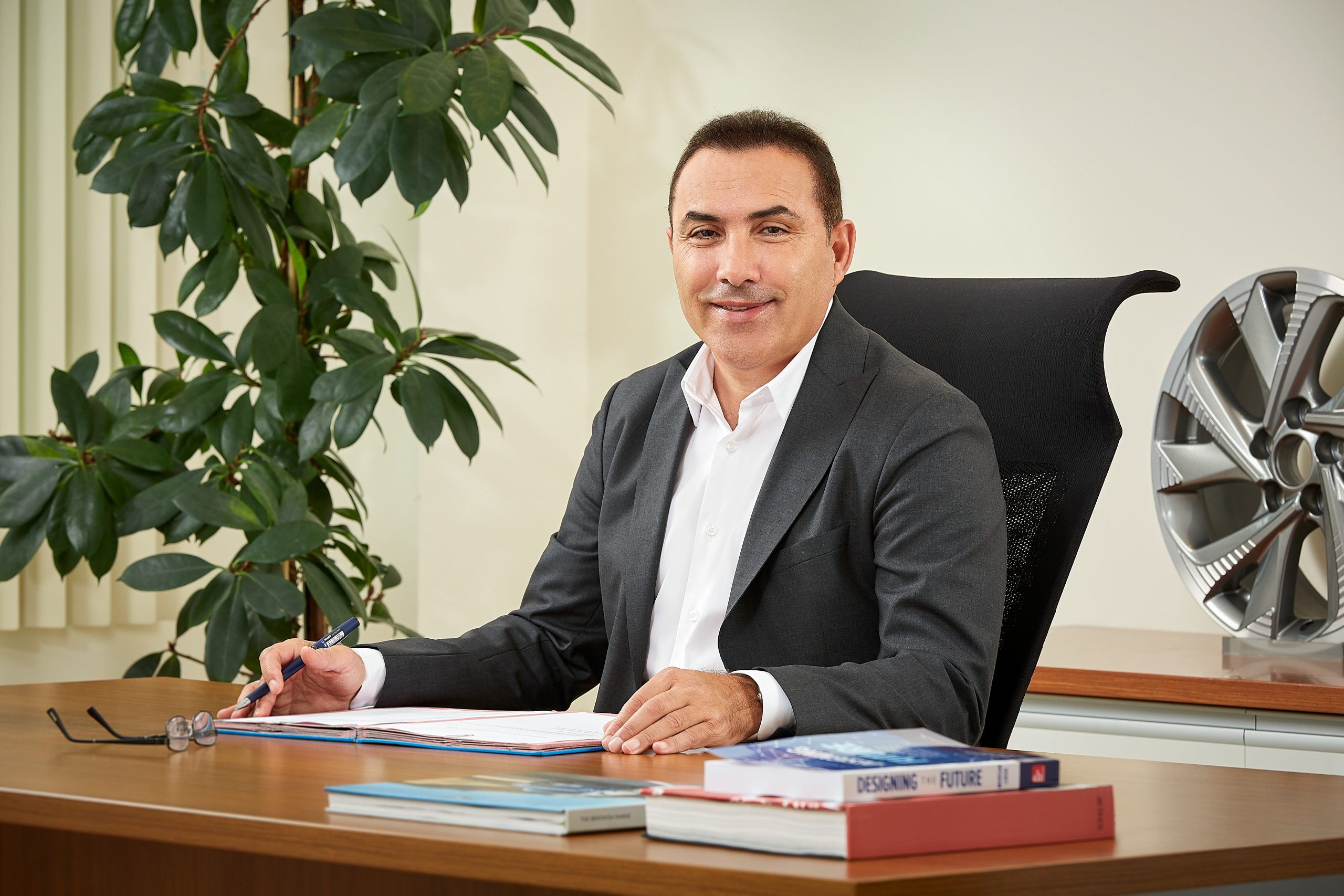 Turkish company CMS Group is one of Europe’s leading alloy wheel manufacturers. Its products are used by 25 well-known brands including Bentley, BMW, Porsche and Mercedes Benz. We chatted with CEO Ünal Kocaman about the road to success in this automotive niche.

With its origins in an aluminium casting company founded in 1955, Izmir-based CMS Group began to specialise in wheel manufacture during the 1980s. By the middle of that decade, Fiat, Ford and Renault all came on board as clients for their Turkish operations. In the ’90s, the company targeted the export market and over the course of the next twenty years expanded output, ultimately working with most of the world’s best-known and most prestigious car manufacturers across the continent.

Current CEO Ünal Kocaman joined CMS as a financial coordinator in 2000, following a varied early career. In 2004, he became CEO and has held the position ever since, overseeing the company’s dramatic rise to international prominence.

“I came to the role with lots of experience,” Mr Kocaman explains. “Banking, holding companies, the paint and chemicals sector, so I was able to bring this knowledge with me. When I received the offer from CMS, I met with the founder, Tonguç Ösen, and was very impressed. He was a great man who enthusiastically embraced innovations and gave room to his employees to develop and grow. He was an inspiration to me and to all of us.”

CMS Group is a family-owned company which aligns itself as per the corporate governance rules. One of the strongest muscles of the company is its culture that established on the founders’ principles and sustained by the family. “The family has a very good relationship with their employees, and they are still very dedicated to their jobs and their business. They are also very good at working with other professionals because they speak their language and they are also very humble, low profile, and they listen to people.”

Getting up to speed

In the first instance, a form of restructuring was enacted. The new CEO recognised the need for change. The wider world was changing, most notably by becoming more interconnected. CMS needed to respond in order to meet the needs of modern commerce. This adaptability has become a watchword of the company under his stewardship and a feature of CMS Group’s culture ever since.

"Our founder was very clear about how people should be treated."

“Yes, we made some changes,” he says. “We changed some of the team members and brought in new management styles. At the same time, it was important to retain our core values. CMS was a company always established with people in mind, and this remained very important to us. Our founder was very clear about how people should be treated and so on. But we also needed to modernise, to update our management style and our transparency, so there was a balance which needed to be struck.”

In this way, the foundations for a new era were laid. Without this, it is unlikely the growth which followed over the course of the ensuing decades would have occurred. Yet these initial measures were only part of an ongoing corporate evolution. A new business plan was also devised, with new objectives and points of emphasis. This would inform all layers of personnel and activity as things progressed.

“At first, there was some resistance from some parts of the management structure,” Ünal recalls. “But I welcomed the discussion. It was very important to have a clear, collective vision. So first, we defined our product and our markets and then strategized from there. This was an essential step because it paved the way for future growth.”

From that point on, CMS embarked on an impressive period of expansion. Ünal’s leadership began with the company manufacturing 1.4 million wheels per year. By 2022, and via the creation of its own in-house 80-strong research and development team, this had grown to 11 million, distributed across Europe via a network of 17 warehouses. Ünal and his teams are very proud of the strong and consistent relationships that have been developed up and down the supply chain with a large number of key partners during that time.

A major and ever-growing part of this expansion has been CMS’s focus on sustainability issues. Like any manufacturer, environmental concerns have played an increasing role in company culture and especially so bearing in mind the company’s positioning within the automotive sector. While wheel design does not receive the same public attention as engine efficiency or fuel composition, it is nonetheless a vital element in the promotion of greener motoring.

“Of course, we apply global standards to our environmentally sensitive production methods,” Ünal explains. “We have the most eco-friendly production sites in our sector in Turkey. We have directly adopted nine of the UN’s global goals for sustainability into our business plan and embedded them into our practice. Alongside that, we have committed to a 15 percent reduction in category two and three emissions by 2025. All of this is incredibly important to us because we believe that growth and expansion have to be achieved in the right way.”

"We apply global standards to our environmentally sensitive production methods."

Bumps in the Road

However, CMS’s upward trajectory was thwarted to some extent during 2020-21 when the coronavirus pandemic wreaked havoc across the world. All sectors of commerce were seriously impacted, and CMS was no different.

“There were two sides to this,” the CEO reflects. “On the one hand, there was the need for assurance, that people were afraid of contamination and illness, and on the other that our business was so badly affected. I think, for us, a clear information strategy was essential, so we maintained an open dialogue with all our stakeholders. Through this, we defined the crisis but also ourselves within it, our difficulties, and responses. In this way, we tried to give them courage to deal with what they were facing.”

With the worst coronavirus problems now hopefully in the past, thoughts have returned to the resumption of the CMS growth plan. Despite the company’s impressive expansion during the course of the last twenty years, Ünal is not ready to rest on his laurels.

“We are still in the investment stage,” he explains. “But we are looking to increase capacity even further. Alongside our corporate growth, we are constantly developing our managers and engineers. Our people, our talent, are so important to us. They are the company’s most essential asset, and we are actively trying to recruit the best talent all over the world, not just in Turkey. At the same time, we are aware that there are some challenges we must face. In particular, the Russia / Ukraine war is causing us some problems at the moment, and I think that capitalism in general is facing some problems. These are things that we, as part of the international business community, have to be realistic about.”

With such a grounded yet forward-thinking mindset, the future appears to remain bright for CMS. The last twenty years may have been a period of spectacular growth, but there is nothing to suggest it is coming to an end.

“The company is created by its people. If the workers understand the world and the company’s place within it, the heritage, the business model, then they are the ones who will bring success. This is the key point as far as I’m concerned and what CMS is all about. Our company is all about its people.”