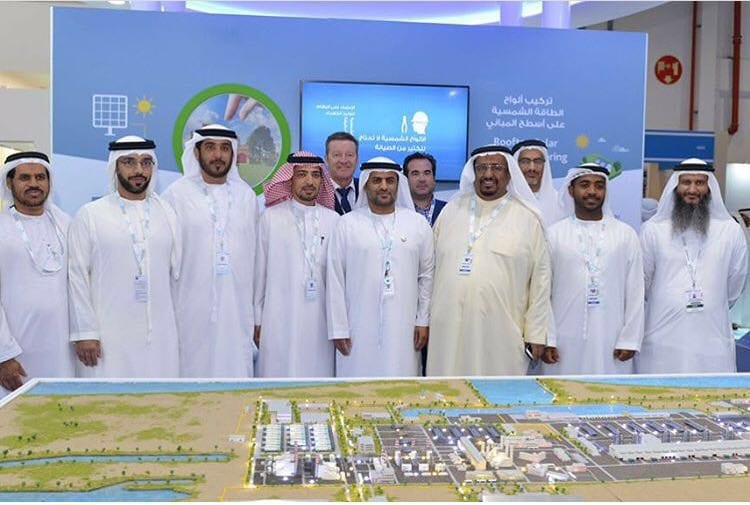 As the boom years took hold in Abu Dhabi, the country demanded a safe and reliable electricity and water supply. This led to the privatisation of the supply chain, and sparked a climate of innovation from which the seeds of Emirates CMS Power Company (ECPC) were sown. Founded in 1998, this private company has since built, owned and operated a combined cycle power and desalination water plant in Al Taweelah, the largest industrial site in the UAE. A pioneer in its own industry, ECPC is also an internationally recognised advocate for greenhouse gas reduction, environmental sustainability and efficiency. Ahmed Al Adawi’s ECPC journey began as Executive Manager. He says: After sixteen years of the plant in operation, the company needed some fresh blood. As a trained engineer who also studied commercial enterprise, Ahmed was an ideal candidate to join the company. He brought a unique combination of skills to the table, along with fresh ideas and a hunger for evolution.

With Corporate Social Responsibility at the core of the ECPC ethos, it’s hardly surprising that local participation is of the utmost importance to the company. The plant boasts a 100 per cent retention rate of employees and 50 per cent of the workforce are UAE nationals. We encourage our team members to work their way up the ranks, says Ahmed. ͞The majority of our top positions are taken by locals; the head of engineering, the deputy manager, four shift leaders etc. This not only helps our society but also creates a sense of loyalty to the company.”

As a testament to his faith in his local team, Ahmed set them a challenge: to take over the management of the plant for a month, while foreign employees observed. I allways knew this exercise would be a success. You could say it was putting the security of the nation at risk, however I had complete trust in the local team. It has encouraged them to work harder and to be proud of what they can achieve. Not only did this prove beneficial for the ECPC workforce, the exercise has set a benchmark for companies in the industry who are now following suit. Ahmed is a local himself and hoped that he could be an inspiration for fellow nationals to get involved with industries integral to the running of their kingdom. With a reputation that exceeds his title, Ahmed has been maintaining a unique relationship with the foreign partners from day one. ͞I have been in the business for a while. The partners tend to know who I am before getting involved, he says. Similar to its nurturing of local teams, ECPC puts great emphasis on the relationship upheld with foreign partners.

“We are proud to have international businesses involved with the company. We experience the ups and downs of business together and always support each other through any issues. Our relationship is very close. Beyond the progress of the company’s forward-thinking relationships with employees and partners, Ahmed was tasked with a list of objectives to achieve. ͞The major one was to meet international standards for policy, procedures, governance and administration. They needed someone with new methods and ideas. The second was to bring the company above the 50 per cent threshold for monetisation, and the last was to make sure that our team of first line management were all home-grown.”

The growing success of ECPC has not come without its challenges. With the leading figures coming from a business development environment, a disconnect between the various roles throughout the operation needed some clarification. Ahmed believes that it is important for every employee to understand the impact of their role within the company’s operations –a
philosophy that is proving a success. He is passionate about educating all the members of staff on the general knowledge of the company to help them feel included and more invested and interested in the roles they are playing.”

Looking to the Future

There are some exciting new prospects on the horizon for ECPC. Its contract with the Abu Dhabi government has been renewed and there are plans to expand. However, Ahmed is giving no clues as to the exact nature of the strategy. All I can reveal is that the UAE has a surprise coming. We are looking at the latest technology and sustainable, long-term expansions for the company. With ECPC’s record of excellence, there’s no doubt it will be a surprise worth waiting for.