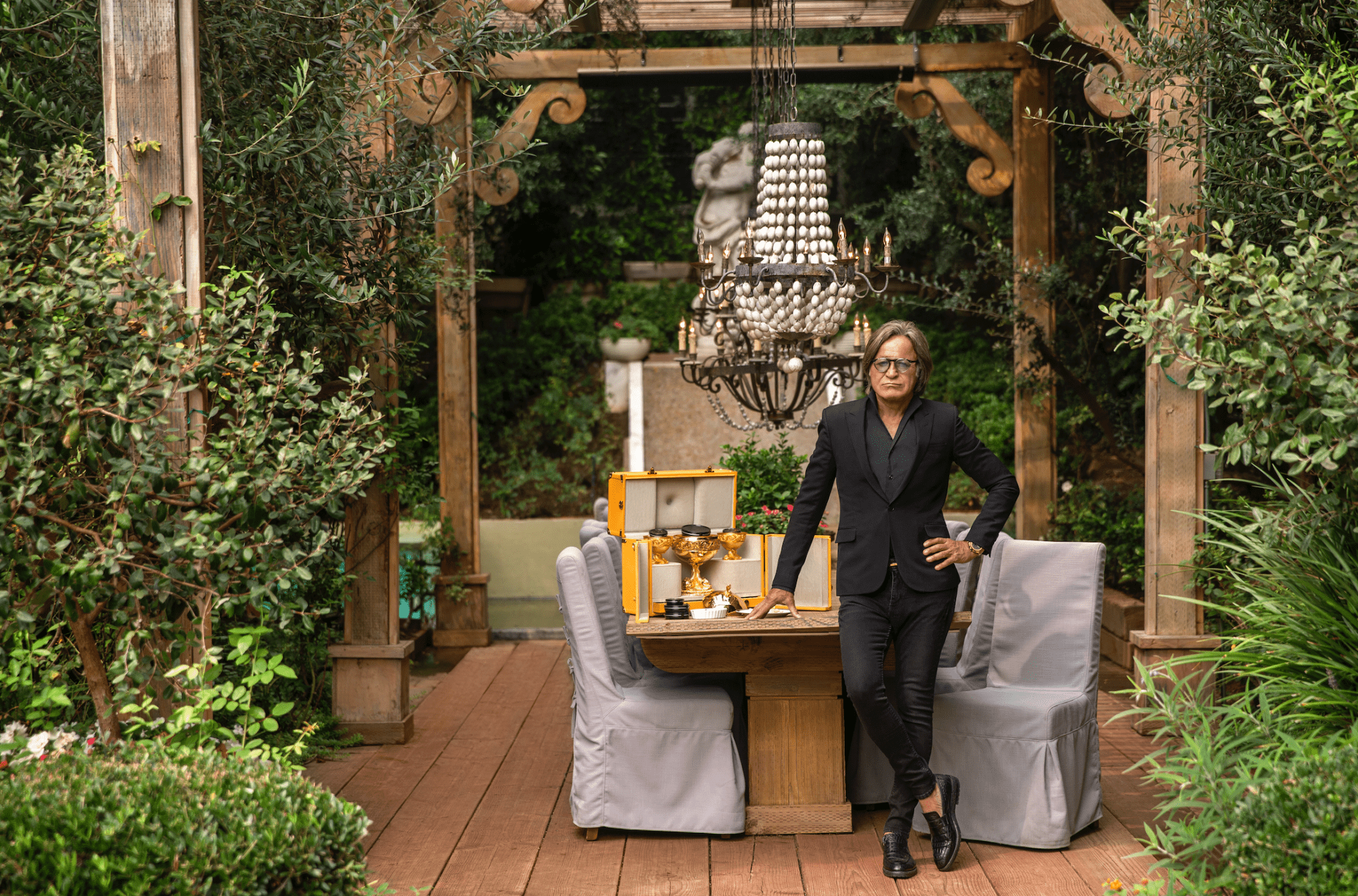 Mohamed Hadid has building in his blood – his great-grandfather Daher Al Omer built the port of Haifa – so it’s no surprise he’s made a name for himself in the real estate game. Mohamed spoke to Milestone about what inspires him, what he’s most proud of, and his other business ventures.

One thing Mohamed Hadid is not short on is confidence. The 72-year-old Palestinian-American and former refugee has succeeded Stateside as one of the country’s top property developers and a reality TV star, not to mention fathering two of the world’s best-known supermodels, Bella and Gigi. So, who does he credit for his self-belief and success? His parents – “who else?”

“My family went through a lot – we were forced out of Palestine and fled to Syria in 1948. From there we journeyed to Lebanon and then to Tunisia before ending up in Greece and finally across the Atlantic in Washington, DC,” Mohamed says. “Throughout all this time and upheaval my parents made sure that me and my seven siblings were well educated and that we maintained our culture. They ensured we were happy and didn’t carry any anger, like many refugees do. They made sure we were always protected so we had the confidence to move forward. My parents gave us wings.”

My children are by far my greatest achievement.

A wonderful example of a youthful Mohamed (in his early twenties) putting his instilled confidence into practise was when he visited his father in Greece, who had moved to Rhodes to head the Voice of America after the family settled in America. Having met two businessmen on the plane over from Washington, Mohamed was invited to join them that evening. “We ended up going to a disco,” he recalls. “I don’t drink alcohol, never have, but I was interested to see the place – there was a massive queue outside though, literally about a mile long. I looked at my two companions and said we should use our savings to start our own club on Rhodes. They agreed. We just had to find a space, which I did the next day.”

Mohamed explains that an old general lived in “the most incredible house overlooking the sea” on the same street as his father. He knocked on the door of the old timer who was at first suspicious – but Mohamed charmed the socks off him and convinced him to let the trio set up shop in his pad. “Aquarius” was born. “Two weeks later we opened the club and it soon became the most popular place on the island,” the property mogul says. Buoyed by funds generated from both Aquarius and another gig restoring and exporting cars from Greece, Mohamed returned to America with one goal: to become the biggest property developer in the game. He made some highly publicised deals in the 80s, like paying $150 million for the Ritz-Carlton hotels in New York and Washington, while also outmanoeuvring Donald Trump to beat him to a multimillion-dollar development project in Aspen. The former president had gone so far as to sign a contract to buy the site from a creditor in a foreclosure proceeding, but Mohamed wasn’t willing to give up the chase and pre-empted the deal.

My family went through a lot – we were forced out of Palestine and fled to Syria in 1948. From there we journeyed to Lebanon and then to Tunisia before ending up in Greece and finally across the Atlantic in Washington, DC.

As a result, he’s often been labelled a risk taker and someone who can “smell a good deal” long before other players on the real estate circuit, as well as someone who is not afraid of upsetting the big rollers. Not only this, but he donated a 45-acre plot of land in the east of Aspen to the Aspen Institute, an international non-profit organisation founded in 1949 which “promotes the creation of a free, just, and equitable society in a non-partisan and non-ideological setting through seminars, policy programmes, conferences, and leadership development initiatives,” as stated on its website. Mohamed’s gesture ensured the institute was able to continue operating: “This is a super important part of my life,” he says. In 1991 he also opened Dar Al-Hijrah (The Refugees’ House): “Building Dar Al-Hijrah in Falls Church, Virginia is one of my proudest accomplishments and projects. It has over 60,000 members and provides more than 30,000 meals during the month of Ramadan. It also has a school that’s open to everyone. During a recent speech I made at Harvard University a woman stood up and told me it is now the largest Islamic centre in North America. It’s my baby.”

Beating the likes of the former president to the punch outlines Mohamed’s determination but always humble, he credits another family member for inspiring him to build: his great-grandfather Daher Al Omer, aka the Prince of Nazareth. Aside from ruling over northern Palestine until 1774, Al Omer also spearheaded the construction of the port of Haifa in the mid-18th century, so it’s no surprise that Mohamed felt the urge to create himself – bricks and mortar course through his veins. The developer may have also inherited other, perhaps more ruthless characteristics from Al Omar that have helped him to succeed in the dog eat dog world of real estate. “My great-grandfather started his reign in the 1730s and ruled over Galilee before expanding to take control of Arraba and finally Akka,” Mohamed says proudly. “After he took Akka he fortified the city and it became a trading hub between Palestine and Europe. He’s inspired me a lot.”

While the Palestinian-American’s business ventures lined his pockets in the 80s, 90s, and noughties, he’s recently made the headlines for a failed project – a $50 million Bel Air mega mansion – after a local Santa Monica judge ordered it to be demolished. Mohamed argues he’s been unfairly treated and even says he was victim of “a plot by a neighbour who wanted to extort $3.5 million.” “The judge decided on his own that the house should come down and ordered it without any reason, a jury was never even assembled due to COVID,” he explains. The case is now being heard by the appeals court, despite many media outlets reporting that it was initially heard in the Supreme Court, much to Mohamed’s irritation. However, he’s made of stern stuff and is determined to fight his corner while pursuing his other business ventures.

One such project is working alongside Hassan Morshedy (CEO of Memaar Al Morshedy) on the world’s largest residential building – Skyline in Cairo, spanning a total area nearly 2,00000 m2 . “It’s all about creating an incredible quality of life for the 40,000 people living in the development, and an unforgettable experience for the 150,000 people coming in and out every day,” he says. “It will be like a little city. This type of thing hasn’t been done before, not just in Egypt but the world. Skyline has all the facets of things I have done in the past, which is a combination of presidential, hotels, city centres, and community planning, and the goal is to incorporate all of this in one area. The size of the plot, the different cultures involved, the design, it’s all very exciting. It’s going to be one of the most iconic and important city centres in the world. I met Hassan years ago and we’ve already worked on some successful projects together, so we’re very excited.” By providing up to 40,000 people with 13,500 new apartments all housed in what the Guinness Book of World Records claims will be the biggest residential building on the planet, Mohamed and Hassan are aiming to fix Cairo’s housing problem by developing the ambitious $530 million mega project, which will take several years to complete. Watch this space.

My great-grandfather started his reign in the 1730s and ruled over Galilee before expanding to take control of Arraba and finally Akka.

Mohamed is also making a splash in the caviar business. He’s joined forces with Edward Gant, whose family has 30 years of experience in the seafood game, to create Hadid Caviar. But what makes his caviar stand out from the crowd? “It’s sustainable and 100% traceable,” he explains. “We only select the finest eggs – our sturgeon species come from different locations around the globe, such as Oscietra sturgeon from Russia and our Beluga from the Caspian Sea. We have packing stations in London, Dubai, and New York so we can guarantee next day delivery to much of the US, UK, Europe, and UAE. What’s more, our caviar isn’t as salty as others, you can really taste the quality of the eggs. Caviar is one of life’s finest pleasures, one should be able to taste its true flavour.”

With so many accomplishments and milestones reached, asking Mohamed what he’s most proud of in his life might have warranted a delayed response to allow for some consideration, but he answers instantly. “My children, there’s no question. They make me incredibly proud every day and everything they’ve achieved is down to them. When they were younger I tried to give them money but they always rejected it – they found their own jobs, are engaged in loads of charity work, and are incredibly conscious about what’s going on in the world around them. They are by far my greatest achievement.”